I probably come from a long line of folks with Inattentive ADHD. Sometimes I like to think of my family’s version as Jewish ADD, because we read all the time. But the official name is Attention Deficit/Hyperactivity Disorder–Predominantly Inattentive Type, or ADHD-PI. My father definitely had it. My paternal grandfather, from what I’ve gathered about him, most likely had it as well. 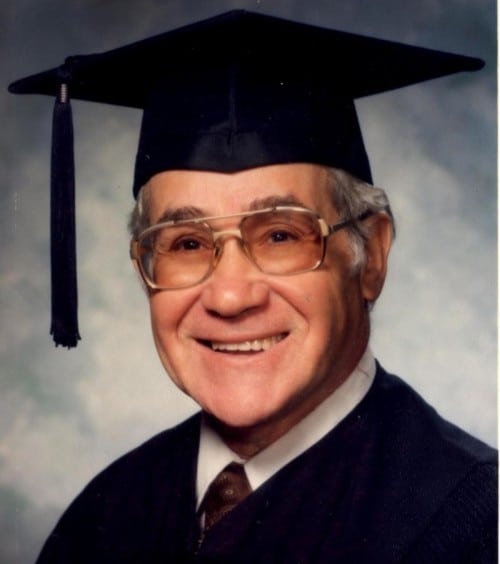 My father, Abraham “Al” Letich, the day he got his bachelor’s degree at age 60 — one of the proudest days of his life.

But nobody knew about ADHD-PI in my grandfather’s day, or my father’s, or even when I was growing up back in the Sixties. Very few people talked about ADHD back then, and the few who did only talked about it in reference to children who were disruptive and hyperactive.

That wasn’t me. But with my fidgetiness, my sloppiness, my daydreaming and constant doodling, and my missed or last-minute homework, many of my teachers would get angry or annoyed at me. I’ll never forget the time my fourth-grade teacher turned my three-leaf looseleaf binder over in front of the entire class. Of course, papers flew in every direction.

They said I wasn’t working up to my potential. Heck, I knew that! But I had no idea what to do about it. Being raised only by my ADHD father (my mother had died of cancer when I was three), I wasn’t learning the skills I needed to manage it.

But I was unusually bright, so I could get almost all A’s all the way from grade school through high school, even though I never studied and began most of my research term papers two days before they were due. (This was looong before the age of the Internet. Now that was a feat!)

My ability to coast through ended when I got to college. My freshman year was a disaster, and I quit. I eventually did get my Bachelors and Master’s degrees, but I had more than my share of stops and starts, aimless wanderings, and angry teachers and bosses frustrated with my missed deadlines, lack of sensitivity to their needs and requirements, and touchiness.

I was brilliant, but only intermittently. I had loads of talent and ability, but I couldn’t harness it. I didn’t want to live a “mediocre” life, but I couldn’t get myself in gear enough to become all that I could be.

During this time — in fact, beginning when I was 13 — I went several different times to therapy to find the “causes” of my problems. Given my childhood, it wasn’t hard to find causes! But while I gained much insight and self-awareness, and resolved a number of true psychological issues, most of the problems that most got in my way didn’t really change.

It wasn’t until I was forty, in 1995, when Driven to Distraction was published, that I realized I had ADHD, and I began taking medication for it. Thank God for that, because my ADHD was getting worse.

Medication helped me tremendously. But it wasn’t enough. I was concentrating better, I was even able to accomplish many goals, but I still was just coping. So I would go on the stimulants for a while, then start to feel like they weren’t helping me much, go off them, then get overwhelmed and go back on them again – year after year after year.

My ADHD behaviors hadn’t changed all that much. Even as I was helping other people with their problems, my life was a constant struggle. I didn’t know it could be different.

Finally, I realized that I had to learn more about ADHD. I learned — from research, from seminars, from books like The Disorganized Mind by Nancy Ratey, and from coaching (which I still get for myself) — that more and more is understood about adult ADHD every day.

I came to the realization that, similar to a diabetic, I needed to accept that I had a lifelong disorder over which I had only limited control.

That, because of ADHD, I couldn’t completely trust a lot of what my brain told me.

That I needed help and support and to learn new ways of doing things.

And, most importantly, that if, instead of denying it, I studied it in myself, and learned specifically how and when it affected me, I could figure out what I needed to do to either counter it or work around it, so it doesn’t stop me from living fully.

Now, although I still consider myself very much a “work in progress,” I have command and control over my life in ways I never thought possible. I can think and plan and take action more easily than ever before. I don’t stumble from crisis to crisis.

Whereas I used to dwell constantly on my mistakes and failures (a major component of the emotional side of ADHD), today I think more about what I have accomplished. I have more hope, optimism and enthusiasm than at any time since my twenties. And I’ve become much more reliable to the people I love, with more ease and far less stress.

I am completely committed to helping others make these same kinds of changes in their lives. I believe totally that if you are willing to accept and face your ADHD, you can deeply change the way you live and the way you feel about yourself.

Many years ago, the United Negro College Fund had an advertising slogan that read “A Mind is a Terrible Thing to Waste.” Don’t let adult ADHD cause you to waste any more of your mind or the talents you have been born with. Don’t procrastinate. Don’t put it off. Call for help. Now. Let me help you make the most of your life.